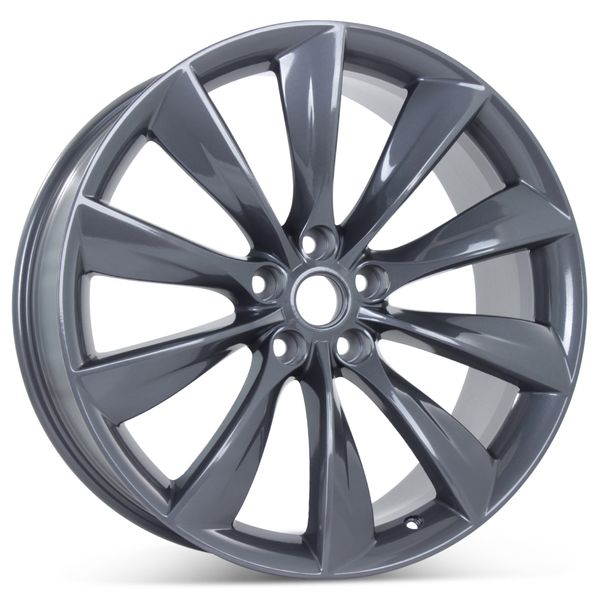 This is a rear wheel in the Gray finish.

This new 21” x 9” 10-spoke replacement wheel design is for the Tesla Model S 21-inch rear Turbine wheels. These rear Tesla 21-inch wheels  came as an option on the Model S in 2012, 2013, 2014, 2015, 2016, and 2017 including the 60D, 70D, 75D, 100D, P85+, P90D, and P100D. Named the Turbine Wheel by Tesla, it came in at least three different finishes, including silver and gray (charcoal), and a third finish that is much darker than the gray and pretty close to a gloss black which we do not carry. This rear Tesla 21-inch turbine wheel for the Model S also came in two different sizes. Some vehicles came with a staggered setup, with this wheel on the rear and a slightly narrower wheel on the front of the vehicle, but it also came with four of the slightly narrower wheels on many of the vehicles. Please check your wheels or tires for confirmation. The design offers a stylish look with a low-profile tire. The Tesla Model S wheels for sale here are made from the same aluminum A356 Alloy as the stock OEM wheel and even hold the JWL structural certification. These rear 2012-2017 Tesla Model S 21-inch turbine Wheels also come with a limited lifetime warranty on the finish.

This part is compatible with 23 vehicles. Please select your vehicle to ensure compatibility.