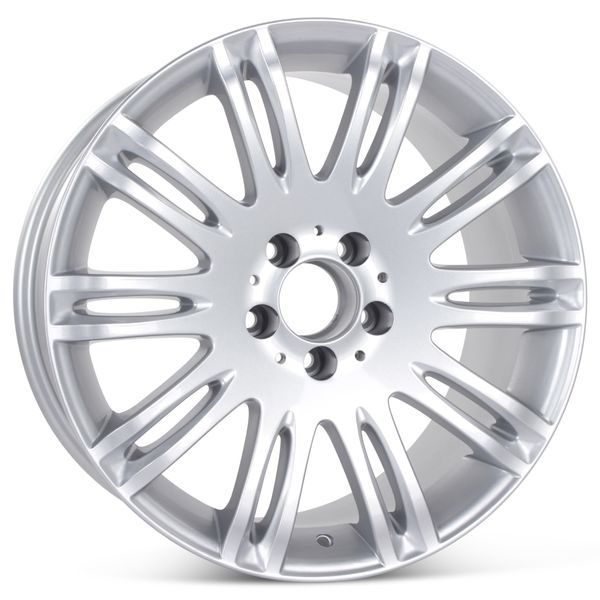 These new 18” x 9” 10-Twin-Spoke (aka paired spoke, double spoke, split spoke or 20 spoke) replacement Mercedes E-Class wheels are the most popular E-Class alloy wheel design since their initial release in 2007 and saw use as both Mercedes E350 rims and E550 rims until 2009. They come in two stock finishes; high sheen with Titanium Silver (Machined with Silver) and Titanium Silver (Silver). These were made only for the rear wheels for the RWD versions of the E-Class of 2007, 2008 & 2009, while they were also universal (meaning on the rear as well) of the 4Matic versions of the vehicle. These 2007-2009 Mercedes-Benz E-Class wheels offer a stylish appearance with a low-profile tire and are the perfect replacement for a damaged factory wheel, whether cracked, bent or even just scuffed. These Mercedes-Benz E-Class alloy wheels are made from the same aluminum A356 Alloy as the OEM wheel and even hold the JWL structural certification found on many newer Mercedes Wheels. These replication 2007-2009 Mercedes E-Class wheels also come with a limited lifetime warranty on the finish.

This part is compatible with 6 vehicles. Please select your vehicle to ensure compatibility.