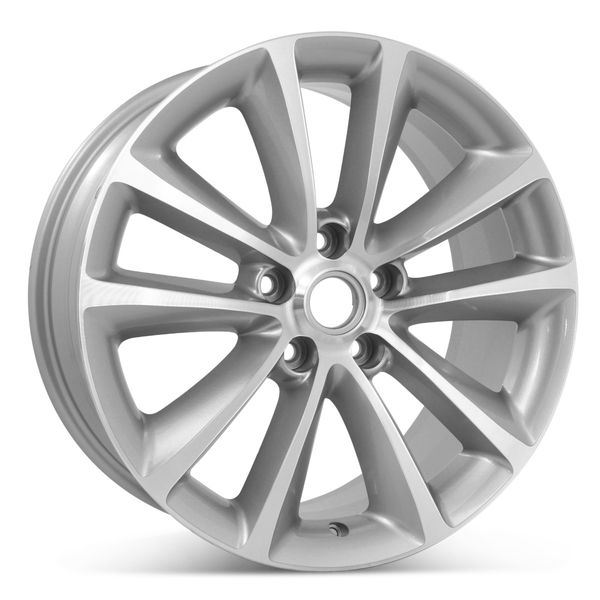 Standard option (RV1) NOT the machined and Black Finish

This 18” x 8” 5-V-spoke (aka 10 spoke or even multi spoke) replacement wheel design replicates the factory 2012, 2013, 2014, 2015, 2016 and 2017 Buick Verano rims. These 2012-2017 Buick Verano rims came standard on Convience Group, Leather Group and Turbo Group packages.  The wheel was called the RV1 option.  Later models refered to this wheel as Option RV3.   Released in this very stylish machined with silver finish, the paint is relatively easy to match. Later Buick released a Machined with Black version that was offered Exclusively on the Sport Touring.  Buick refers to the finish as Machined Alloy OR Polished face with Sterling Silver.   This Buick Verano wheel offers a stylish and sporty look with a low-profile tire. These Buick Verano wheels are a great replacement for your damaged factory wheels, whether scratched, scuffed, cracked or dented. These Buick Verano wheels are made from the same aluminum A356 Alloy as the stock OEM wheel and even hold the same JWL structural certification. These OEM-replica 2012, 2013, 2014, 2015, 2016 & 2017 Buick Verano rims also come with a limited lifetime warranty on the finish.