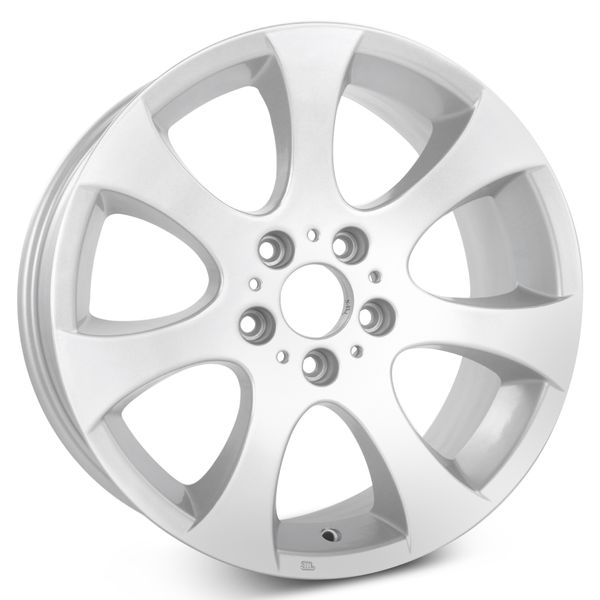 This new 18” x 8.5” 7-spoke replacement rim was originally made as the BMW 3-Series’s wheels on the 2006, 2007, & 2008 models. It may have been offered on some 2009, 2010, & 2011 models, as well. These 18-inch BMW 3-Series rims were primarily offered on the Sedan 330i Sport Packages, as well as the 335xi Sport Packages, though it has been used on a variety of 3-Series vehicles including the 323i, 325i, 328i & 330i as well. BMW has given it style 162 and called it 7 star spoke. It was only released in this one standard silver painted finish and the paint is relatively easy to match. This is the 8.5” wide wheel is made for the rear of the vehicle. You can find the slightly narrower version here. The design of these BMW 3-Series 18-inch alloy wheels offers a sporty look with a low profile, run flat tire. They are an excellent replacement for a damaged factory wheel, whether cracked, bent or even just scuffed. These BMW 3-Series 18-inch rims are made from the same aluminum A356 Alloy as the stock OEM wheel and even hold the same JWL structural certification. These 2006-2009 BMW 3-Series alloy wheels also come with a limited lifetime warranty on the finish.

This part is compatible with 71 vehicles. Please select your vehicle to ensure compatibility.