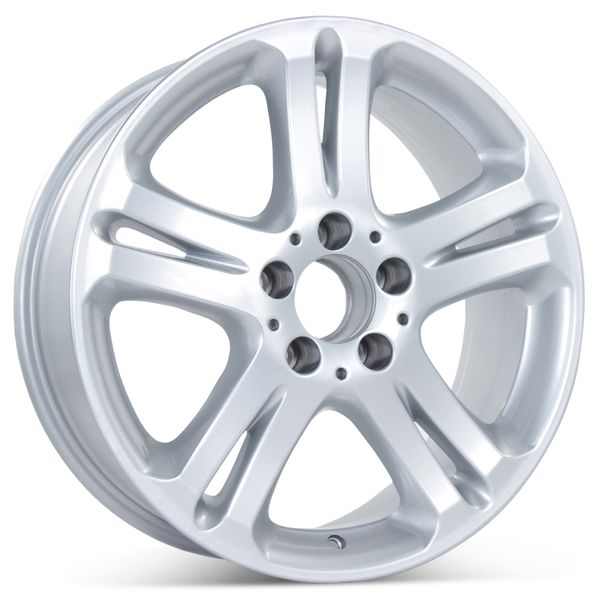 This new 17” x 8” 5-twin-spoke (paired spoke, double spoke, split spoke or even 10 spoke) replacement wheel design was used for the 2004, 2005 & 2006 Mercedes-Benz E-Class vehicles. More specifically, they served as the 2004, 2005 & 2006 Mercedes E350’s wheels and the Mercedes E500’s wheels. It came standard on many of the sub-models though they were intended for the E500 Sedan & the E500 4matic Wagon. This design came in only one silver painted finish (sterling silver by Mercedes-Benz). These 2004-2006 Mercedes E350 wheels offer a stylish appearance with original low-profile all-season performance tires. Made from the same aluminum A356 Alloy as the stock OEM wheel and even holding the JWL structural certification, these 2004-2006 Mercedes E350 or E500 wheels for sale are an excellent replacement for a damaged factory wheel, whether it is bent, cracked or even just scuffed. These replica 2004-2006 Mercedes E350 wheels and E500 rims also come with a limited lifetime warranty on the finish.