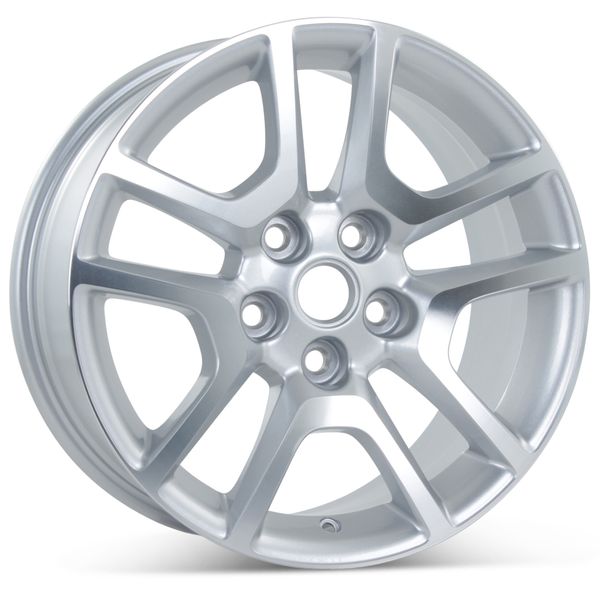 This 17” x 8” 5-split-spoke (aka twin spoke, double spoke or even paired spoke) lightweight replacement wheel design was made to replicate the original 2013, 2014, and 2015 Chevrolet Malibu’s rims. In 2013, when this design was first introduced it came standard on the Chevy Malibu Ecotech 2.4L (aka Eco). It also came on the Malibu1LT with Power Convenience Package for 2013, 2014 & 2015, while in 2014 it was offered on both the Malibu 1LT Crystal Red Tintcoat Premium Package & White Diamond Tricoat Premium Package, and in 2015 on the Iridescent Pearl Tricoat Premium Package. This design is rumored to have been used by Chevrolet in 2 different finishes; the machined finish with silver paint (seen here) and a full painted silver finish (which we have not yet been able to verify). The design of these 17 inch Chevy Malibu wheels offers a stylish and sporty look with a relatively low profile tire. These 2013-2016 Malibu wheels are great replacements for damaged factory wheels, whether the damage is minor or considerable. The Chevy Malibu wheels for sale here are made from the same aluminum A356 Alloy as the stock OEM wheel and even hold the JWL structural certification. These OEM-replica 2013-2016 Chevrolet Malibu rims also come with a limited lifetime warranty on the finish.