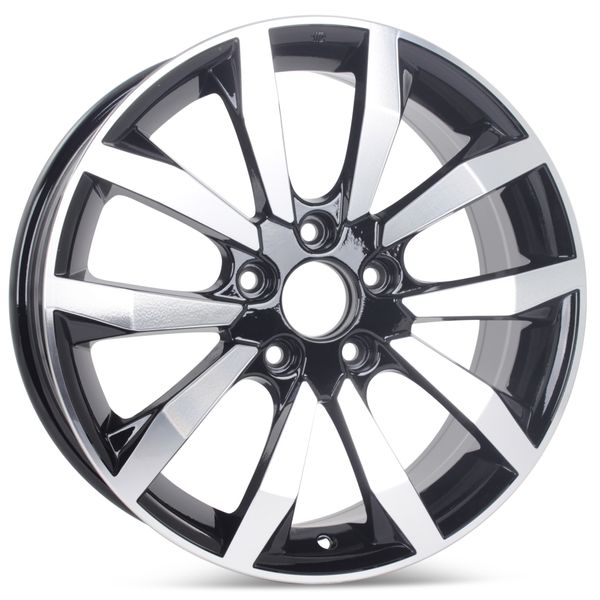 This new 17” x 7” 5-V-spoke (aka 5 paired spoke or 10 spoke) replacement wheel design was offered on the Honda Civic for several years. The Civic factory wheels were made in 2 different finishes. First in 2009, 2010 & 2011 it was made in a machined with charcoal paint (found under SKU # ALY63996U35N), at which point it came standard on the Civic Si Coupe & Sedan. This wheel design was brought back as the 2014 Honda Civic rim for both the EX & EX-L, but this time, in machined with black paint (seen here). The 2014 and 2015 Honda Civic wheels for sale here offer a stylish and sporty look with a relatively low-profile tire. They are replicas of the original factory wheels—perfect replacements for bent, cracked, scuffed, or scratched rims. The Honda Civic wheels for sale here are made from the same aluminum A356 Alloy as the stock OEM wheel and even hold the same JWL structural certification. These OEM-replica 2014 and 2015 Honda Civic rims also come with a limited lifetime warranty on the finish.

This part is compatible with 109 vehicles. Please select your vehicle to ensure compatibility.