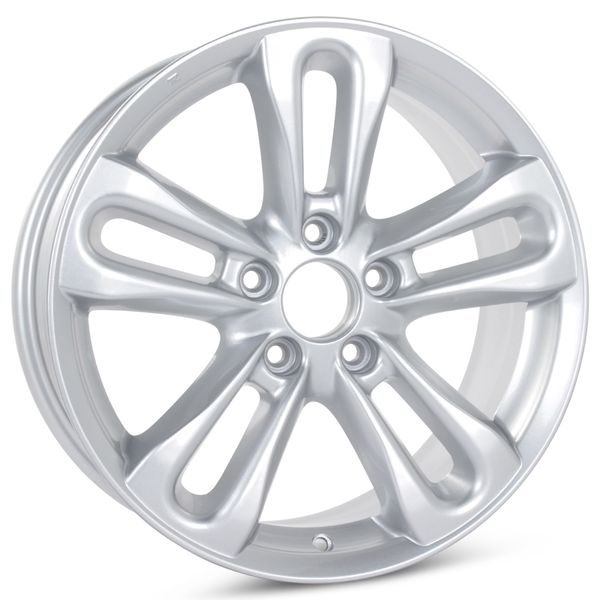 This new 17” x 7” 5-split-spoke (also known as twin-spoke, double-spoke, paired-spokes, or even ten-spoke) replacement wheel matches the Honda Civic rims originally made just for the 2006 Civic Si Coupe. It remained the standard option on the 2007 & 2008 Civic Coupe Si, but on those years, Honda introduced the Civic Si Sedan, which also came with this design. These Honda Civic alloy wheels were often an optional upgrade for other sub-models such as the Honda Civic DX, LX, EX & Hybrid. It was released in 2 finishes, the lighter of which can be found in this listing. Unfortunately, we do not carry the dark gray. The design of these 17" Honda Civic aftermarket wheels offers a stylish and sporty look with a low-profile tire. These 2006-2008 Civic alloy wheels are an excellent replacement for a damaged factory wheel, whether cracked, bent, or curb-rashed.  These 2006-2008 Honda Civic rims are made from the same aluminum A356 Alloy as the stock OEM wheel and even hold the same JWL structural certification. Our 2006-2008 Honda Civic wheels for sale also come with a limited lifetime warranty on the finish.

This part is compatible with 37 vehicles. Please select your vehicle to ensure compatibility.