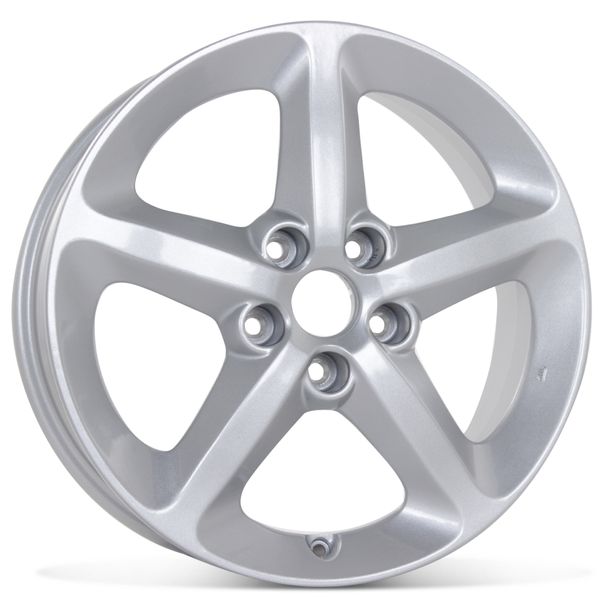 This new 17” x 6.5” 5-spoke replacement wheel design is intended for use as the 2006, 2007, 2008, 2009 & 2010 Hyundai Sonata’s rims. It originally came standard on most of the SE and some of the Limited sub models of the Sonata. The original 2006-2010 Hyundai Sonata  wheels were only released in this one standard silver finish making it relatively easy to match, but three versions of this wheel were in fact built. One that is far less common and had a flange (possibly named Euroflange by Hyundai), another made with a slightly smaller opening around the valve area, and the final version (seen above), made for the models with TPMS sensors. The wheel listed above is interchangeable and can be used for all three versions. The design offers a stylish look with a relatively low-profile tire. The Hyundai Sonata wheels for sale here are an excellent replacement for a damaged factory wheel, whether cracked, bent or even just scuffed. These 17" Hyundai Sonata rims are made from the same aluminum A356 Alloy as the stock OEM wheel and even hold the same JWL structural certification. These replication 2006-2010 Hyundai Sonata rims also come with a limited lifetime warranty on the finish.

This part is compatible with 30 vehicles. Please select your vehicle to ensure compatibility.