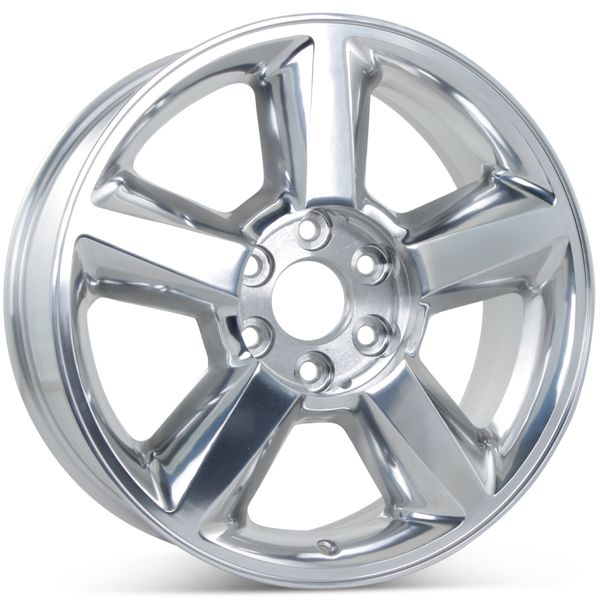 This 20” x 8.5” 5-spoke replacement wheel design for the Chevrolet was used on a variety of Chevy vehicles. In 2007, 2008 & 2009 it came standard on the LTZ versions of the Avalanche, Suburban & Tahoe, while coming as an option for the 1LT & 2LT versions. In 2010, 2011, 2012 & 2013 it again came standard on the Avalanche LTZ, Suburban LTZ & Tahoe LTZ, while then becoming an option on the LS & LT (LT ½-ton in 2013) for all 3 models. In 2014 however, the Avalanche was no longer being produced, but the wheel was still standard on the Suburban LTZ & Tahoe LTZ, and as options on the LS & LT again.These 20" wheels were offered in 3 different finishes. The information regarding vehicles listed above pertains to the polished-aluminum finish seen here; which is the only finish The WheelerShip currently carries. The other 2 finishes on the original Chevy Silverado wheels were chrome and silver-painted.  The chrome became available in 2011 on as an option on the LTZ models, while we were unable to find accurate records on which models Chevrolet offered the silver finish on. The design offers a powerful & stylish look. They are an excellent replacement for a damaged factory wheel, whether cracked, bent or even just scuffed. These are OEM replicas of Chevy Silverado wheels, as well as Avalanche wheels, Tahoe wheels, and Suburban wheels. These wheels are made from the same aluminum A356 Alloy as the stock OEM wheel and even hold the JWL structural certification.

This part is compatible with 1100 vehicles. Please select your vehicle to ensure compatibility.